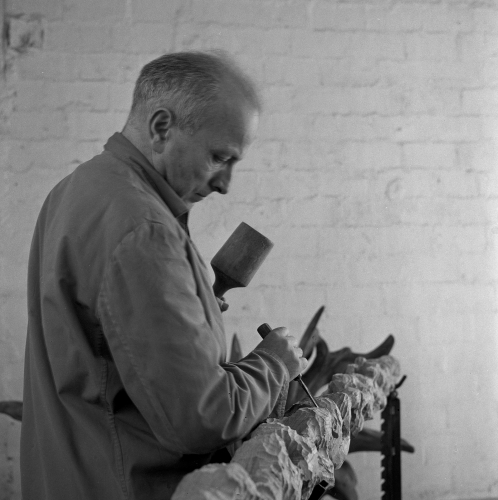 During his highly distinguished career, German-French sculptor François Stahly received numerous commissions for public works both in Europe and America, where Nelson Rockefeller was one of his greatest patrons.
Stahly spent his childhood in Switzerland. His Italian father and grandfather were both painters and strongly encouraged François to follow in their vocation. Though Stahly did not follow their interest in painting, he adopted an interest in the arts and attended art school in Zurich in 1926. At that time, the Bauhaus ideology dominated the avant-garde. While Stahly was inspired by the proclamations of a utopian harmony and universal equilibrium, he was not drawn to the movement's utilitarian aesthetic. So in 1931, he went to Paris and attended the Academie Ranson and found a much broader range of artistic expression. He became part of a group of young artists called Temoignage, which included Manessier, Bertholle and Le Moal; unfortunately his work from this period was lost during the war.
Following the Liberation, Stahly became involved with several architectural projects while also editing the Swiss art review Werk and contributing to other magazines. His sculptures began to take on an organic appearance as Stahly became fascinated by obscure forms and patterns in nature. He became one of the founders of Art Informel, which proposed a pure form of expressionistic abstraction. The group was celebrated in their famous manifesto exhibition in 1948 at Galerie Colette Allendy, "HWPSMTB" (Hartung, Wols, Picabia, Stahly, Mathieu, Tapié, Bryen). The influential American dealer Darthea Speyer and the collector H.P. Roche began acquiring his work and helped him acquire a studio in an old orangery in Meudon.
Stahly also began to establish an international reputation, creating works in Brussells, Vienna and Berlin (1950); and Connecticut and Tokyo (1951). He also won several awards including at the Milan Triennial (1953) and the Sao Paolo Biennale (1957). During the next few years he spent much time in America working on commissions and lecturing at universities such as Berkeley, Harvard, and Stanford, while continuing to exhibit extensively internationally including Stedelijk Museum, Amsterdam, 1961; Tate Gallery, London, 1964; Musée d'Art Moderne, Paris 1965.
Stahly refused to sign a contract with any one gallery preferring to work freely without pressures and demands, which allowed him to work on a diverse range of projects from a Trappist monastery in Briquebrac to the Rockefeller Plaza in New York. This unconstrained creativity continuously stimulated his imagination and produced a truly remarkable body of work throughout his lifetime that is now admired in public spaces and museums throughout the world. 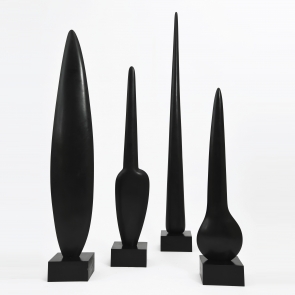 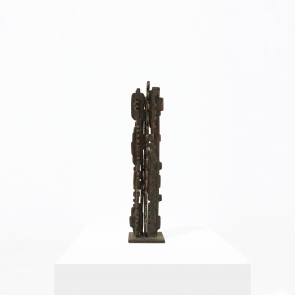 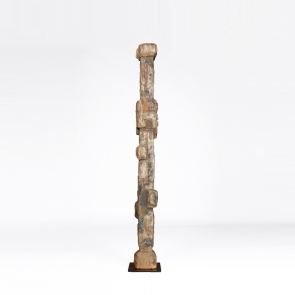 François Stahly
Painted totem sculpture, circa 1950 SOLD
Back To Top